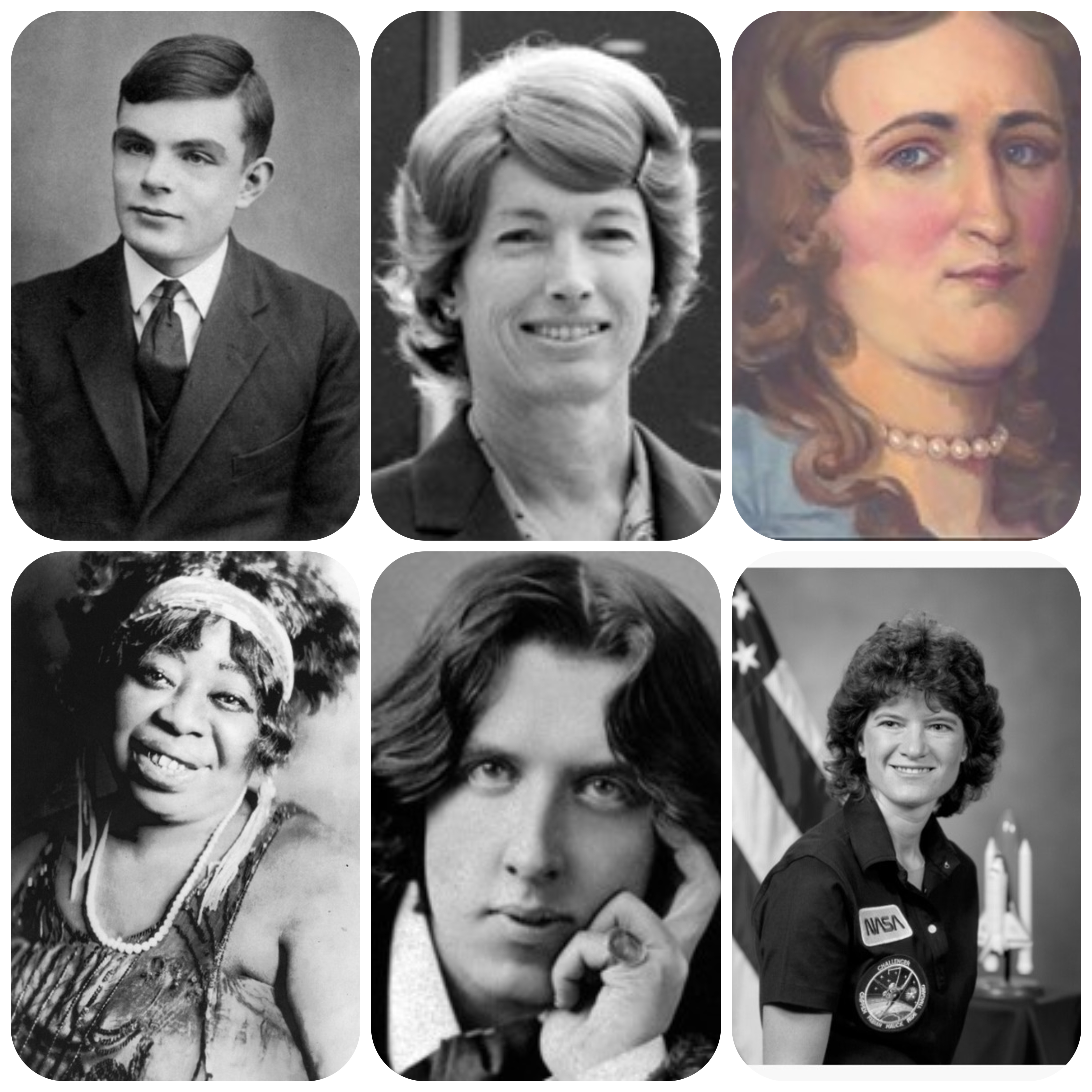 LGBT erasure (also known as queer erasure) refers to the tendency to remove lesbian, gay, bisexual, transgender, asexual and queer groups or people (i.e. the LGBT community) intentionally or unintentionally from record, or to dismiss or downplay their significance. So let’s take a minute to get to know (or remember) and promote some of them:

Was a British mathematical genius who laid the groundwork for artificial intelligence. He studied math and cryptology, and in World War II, he was a major player in breaking codes used by the Germans. He was also gay, which was illegal in England at the time, and he was charged with gross indecency when the police found out. In 2009, the British government formally apologized to Alan Turing for how they treated him.

Irish playwright, author, lecturer, and all-around wit, Oscar Wilde is as frequently quoted as the likes of Confucius, Winston Churchill, Lord Byron, Gandhi, and Ayn Rand.
Despite his personal undoing following his arrest, conviction, and sentence of two years hard labour for the "crime" of homosexuality (technically, "gross indecency"), Luckily the writer remains one of the written world’s most famous and celebrated artists.
However, it wasn’t until 1995 (almost 100 years from his death) that he was honoured by being added to Poet´s Corner at Westminster Abbey.

Deborah Sampson's name may not be world-famous, but the life-threatening risk she took by posing as a man in order to fight the British for American independence during the Revolutionary War — arguably the most world-changing war in human history — cannot be overstated.
Sampson's life was full of examples of her courage and compulsion to sacrifice, or at least risk, her own safety and well-being so that others might live and flourish. In fact, again posing as a man, she once married a colonial woman who had been captured by a Native American tribe in order to save her from being killed.

Sally Ride was an astronaut and astrophysicist and in 1983 was the first American woman in space with NASA. She taught at University of California-San Diego and started a company called Sally Ride Science to inspire girls to pursue science and math.
She died of pancreatic cancer in 2012, and after she died, it became public that she was lesbian and had been in a long-term relationship with another woman, something she had to keep secret while alive in order to prosper in her career.

What are you reading this article on right now? Chances are, it's powered by some of the technology that Lynn Conway pioneered in the 1960s, when she worked as a computer scientist for IBM.
Lynn's work for IBM was some of the earliest into microchips, but she was sacked when the company found out Lynn was transgender and planned to transition - and her work on the project ended there.

The “Mother of the Blues,” was unabashedly vocal about her sexuality in the early 1900s. As an influential musician and one of the earliest blues artists to record her performances, she explicitly expressed her sexuality through the lyrics of her songs. In her famous song “Prove It on Me Blues,” she sings: “Went out last night with a crowd of my friends, they must’ve been women, ’cause I don’t like no men.” Although she was hardly subtle, retrospective interpretation of Rainey and her music consistently washes over her love of women — a reflection of post-jazz-era homophobia in Black preservation movements, not of attitudes at the time, when she enjoyed broad popularity and acceptance. Her famous mentee Bessie Smith (known as the “Empress of Blues”) also had many relationships with women while adopting a heterosexual persona for the public, as did other popular artists at the time, including Alberta Hunter, Josephine Baker and Ethel Waters.